dies with a high extrusion ratio ). The cracks if left unattended will worsen and in severe

likely to be extruded through the die bearing. The result of this at best may be a dramatic

decrease in the surface quality of the extrusion, or at worst permanent damage or

breakage to the die bearing. The chances of this occurring are greatly increased when 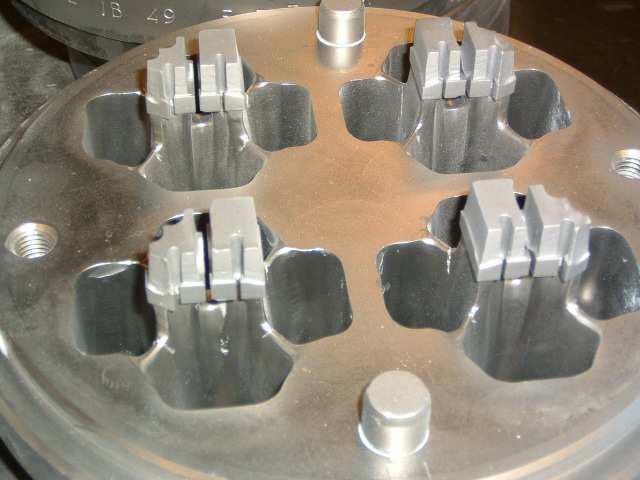 local deformation without shattering or chipping taking place. This damage is most likely

to occur at the base of a web in the welding chamber.

A degree of success in preventing this from becoming a major problem is at hand.

nitrided layer to reveal the softer steel, which is more resilient to pressure deformation

without the likelihood of the same damage occurring.

solution is a little more drastic. Firstly the webs will be cut back as much as 5mm and

then welded. The then welded area is then dressed back to the original height and

web joins to the main body of the die or mandrel. The sharp corners will act as a starting

point for the fracture to begin.

The cracking to the webs adjacent to the mandrel. Here it is only minor and

inspection is sufficient. When the cracks become more of a problem the some

refurbishment will be necessary.